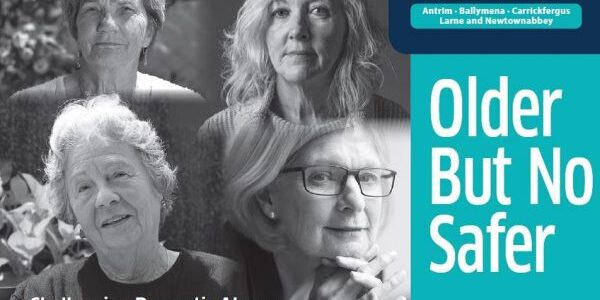 Domestic abuse is largely a hidden issue for older women, under-recorded and under-researched. Speaking online as part of the campaign Women’s Aid ABCLN’s Ambassador Cllr Noreen McClelland says “We know that older women are less likely to speak out about domestic abuse. They have fewer opportunities to leave their abusers than younger women, and face a range of additional barriers to access safety and support. We must dispel the myth that domestic abuse does not affect older women.”

“Older women may have been living with abuse for decades, in silence and invisible or it may start in later years. We have seen this portrayed in the Coronation Street storyline where the older character, Yasmeen experiences psychological and emotional abuse, physical violence and sexual abuse, isolation and control – and it is this isolation that is the greatest risk just now.”

“Isolation is a key tool used by perpetrators, and for older women experiencing domestic abuse, being isolated from family and friends will have been heightened in lockdown. We must break down the barriers to isolation, and reach out to older women.”

PSNI Detective Chief Superintendent Anthony McNally has added his support to the online campaign saying “An increased understanding and awareness of domestic abuse can provide much needed protection for older women.”

The Older But No Safer campaign includes a short film ‘The Lonely Old Women’ which was screened online during World Elder Abuse Awareness Day. In it volunteer Joan Cosgrove recounts the experiences of an older woman whose whole life has been dominated by abuse, with every high brought low, and every memory tainted. Not even widowhood can bring escape.

Speaking online, volunteer Joan says “It is my privilege to represent the voice of older women affected by domestic abuse. The Lonely Old Woman could be the story of your neighbour, a friend, a relative or you.”

“Older women tell us that they may be older but they are no safer. We want older women to know that you are not alone, and it is never too late to seek help.”

“Women’s Aid ABCLN is here for you and help is available. Everyone has the right to be safe at home and it is never too late to change your situation.”