‘Domestic Abuse – It is Never OK’ 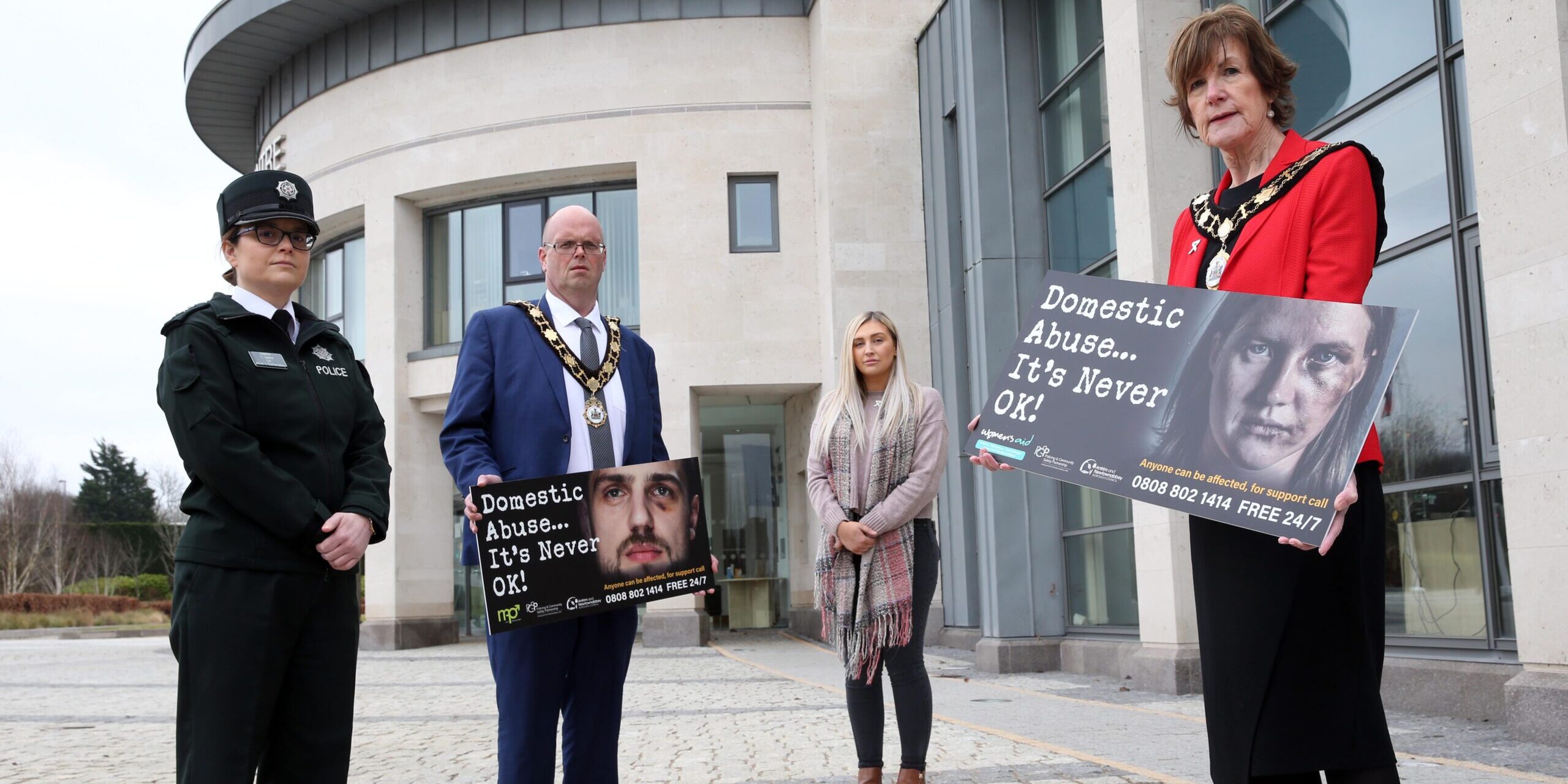 This hard-hitting campaign is aimed at raising awareness that anyone can be a victim of domestic abuse regardless of gender, ethnicity, age, background or religion.

The latest figures reported by the PSNI showed there were 31,848 domestic abuse incidents in Northern Ireland last year, one of the highest 12 month periods recorded since the start of the data series in 2004/05.

Mayor of Antrim and Newtownabbey, Councillor Jim Montgomery, played a fundamental role in setting up this campaign and has worked closely with the PCSP. He said “Domestic Abuse should not be accepted at any level, it knows no boundaries, Wives, Husbands, Grandmothers, Fathers, Brothers, Sisters, anyone can fall victim to Domestic Abuse and as a society we need to join together to convey a clear message, there are no circumstances where this is acceptable. I would urge all victims to come forward and seek the help and support they need and deserve. Through this campaign we want to send a clear message – ‘It is Never OK’

I feel very strongly about raising awareness of Domestic Abuse and I am pleased to have been able to work alongside Antrim and Newtownabbey PCSP and Deputy Mayor, Cllr Noreen McClelland, to develop such an important campaign. Domestic Abuse has no place in society today or ever.”

’Deputy Mayor of Antrim and Newtownabbey Councillor Noreen McClelland added “As an ambassador of Women’s Aid and a member of Antrim and Newtownabbey PCSP, I am proud to have worked on this campaign and I commend the Policing and Community Safety Partnership (PCSP) for developing an overarching and impactful message. The latest figures reported by the PSNI are very alarming and the ongoing Covid guidance ‘Stay at Home’ has been extremely tough for victims of Domestic Violence. I would urge all those affected by Domestic Abuse to come forward and put an end to their suffering. There are support services available and telephone helplines which operates 24 hours a day, 7 days a week.”

Rhonda Lusty from Men’s Advisory Project NI (MAP NI), commented “31% of the domestic abuse crime known to the PSNI last year, happened to men.  Men are often unacknowledged victims, their pain and experiences unseen.  We are incredibly grateful that Antrim and Newtownabbey Borough Council and the PCSP take domestic abuse so seriously, for all victims.  Their strong messages of support to men who have faced or are enduring domestic abuse is both innovative and life changing.  Domestic abuse is never ok and there can be no excuse made for it.”

Domestic Abuse is identified as threatening, controlling, coercive behaviour, violence or abuse (psychological, virtual, physical, verbal, sexual, financial or emotional) inflicted on anyone by a current or former intimate partner or family member’.

The Council’s work on tackling domestic abuse has been recognised for the past three consecutive years with a platinum award from ONUS, a social enterprise by Women’s Aid ABCLN that offers specialist training and consultancy services on domestic violence or abuse. The Council have also signed up to the White Ribbon Charter pledging to never commit, condone or remain silent about violence against women.

If you would like more information or have been affected by this please visit womens-aid.org.uk/contact-us/ or www.mapni.co.uk/ or call the free helpline on 0808 802 1414.